If there is no-one playing on the court session that precedes yours, you can start up to 10 minutes early.  Your session will end at the normal time so you will get up to 50 minutes of squash.

If you key in your light control code within 10 minutes of your normal start time you will see a Start Now button.  Touch this to start immediately.

By default there is a 10 second lights-off period between consecutive court sessions.  This can be inconvenient if you are wanting to play continuously over multiple sessions.  Therefore there is an option to merge a session with the previous session. 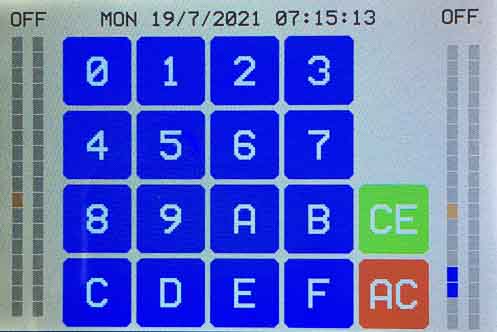 In the above image you can see four columns of rectangles.  The two columns on the left are the court 1 sessions for the day and the two columns on the right are the court 2 sessions for the day.  The rectangles coloured yellow are the current sessions.  (If the courts were in use they would be coloured green.)  The blue rectangles are activated courts - light controller codes have been successfully entered for these courts and the lights for these court sessions will automatically switch on and off at the appropriate times. 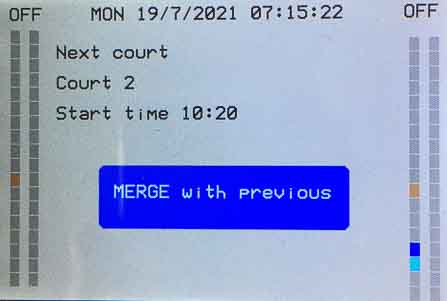 The colour of the rectangle for this selected court session has temporarily changed to light blue.

If you now touch the Merge with previous button the lights-off period between the two sessions will be disabled.  After a few seconds the display will revert to the standard keyboard and the rectangles for the two courts sessions will have been merged into one as in the image below. 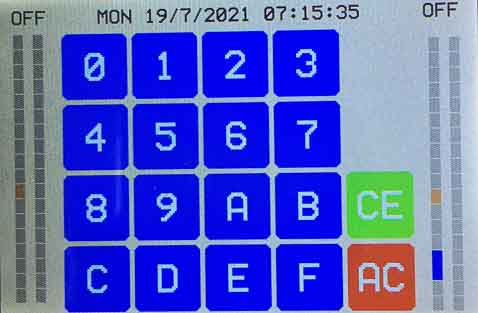 You can unmerge the sessions by repeating the procedure but this time you will see an UNMERGE from previous button as shown below. 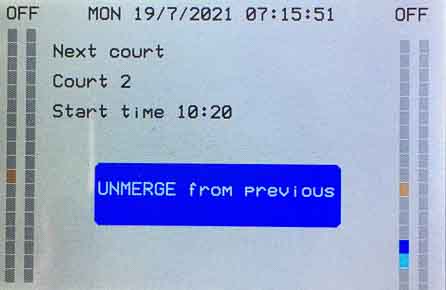 Touch this button to reinstate the 10 second lights-off period between the two court sessions.

Now I can't read these without my reading glasses which is not ideal if, between games, I want to quickly see how much time I've got left to play.  But there is a feature which allows these times to be displayed in a large font:

Simply touch the time that you want to see and it will be displayed for a few seconds enlarged in the centre of the display.